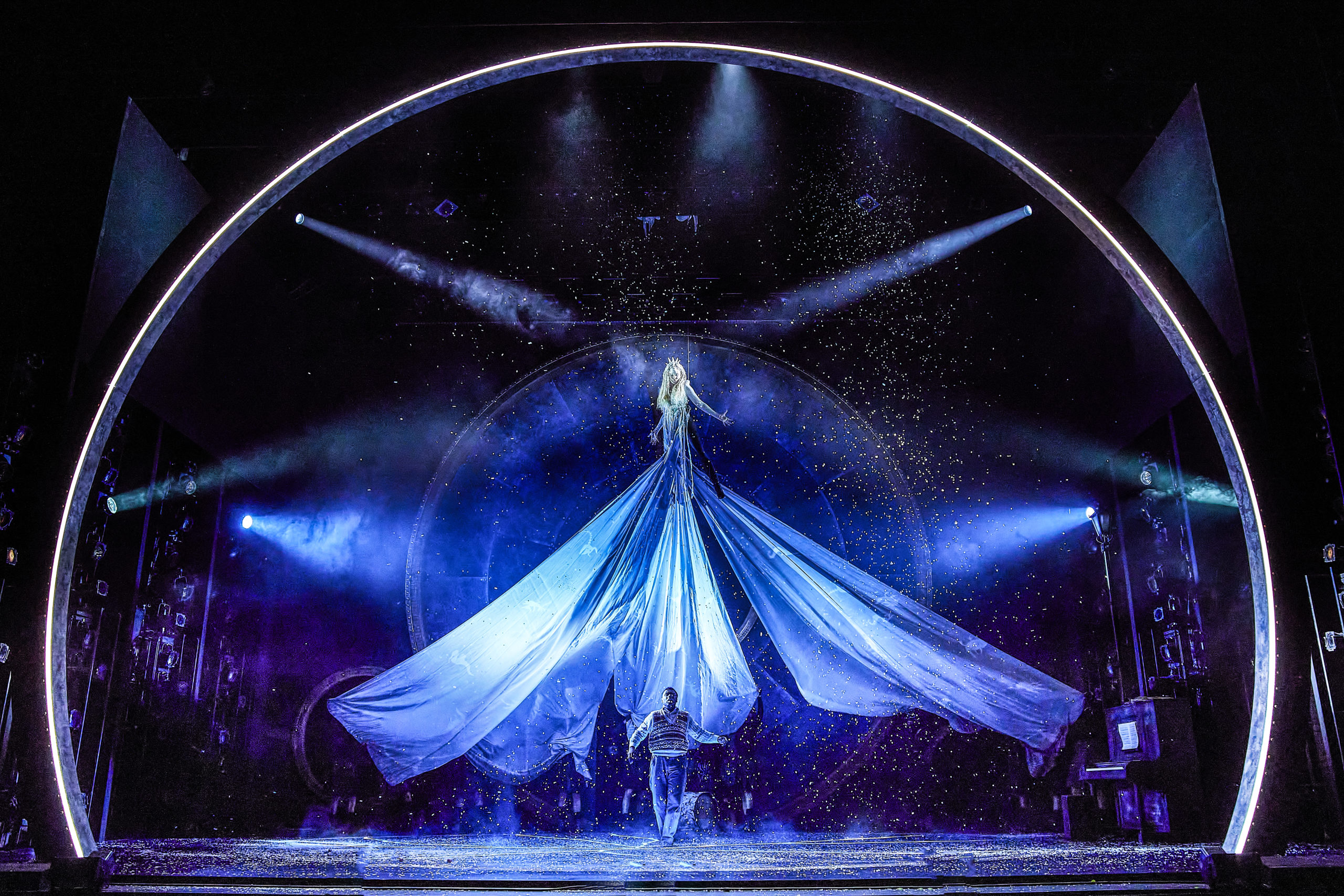 Last night Eowyn and I were invited along to Norwich Theatre Royal to watch the opening night of The Lion The Witch and The Wardrobe Tour which is currently in Norwich.

I am a huge fan of the theatre shows that include animal puppetry, so was very intrigued to see how Aslan would be portrayed, and it was simply stunning.

The Lion The Witch and The Wardrobe Tour

As everyone was getting seated there was a piano on the stage, which was being beautifully played by a solo soldier with 1940s tunes, as the lights went down a soldier entered the stage and an amazing rendition of We’ll meet Again begins, with various musicians and actors appearing on the stage.

The soldiers are waved off to war and the evacuation of the children to Scotland begins, using characters and a model train to give the feeling of a moving train.

The set has a large lit window above the set and as the story goes along various characters appear, you see the childrens mother waving them goodbye as they begin their journey to Scotland.

Be sure to keep your eyes open, as I found parts of the show I was transfixed on the action and sometimes wondered if i’d missed anything above!

Samantha Womack plays the White Witch, but she also appears at the beginning as Mrs Macready the lady responsible for taking the children to their new home, a testament to her great acting ability as I only became aware of her second role when I read the program after the show!

The four children, Lucy (Karise Yansen), Peter (Ammar Duffus), Susan (Robyn Sinclair)  and Edmund (Shaka Kalokoh) were outstanding, very believable and you felt as if you were on the journey with them.

They were sent to live with Professor Kirk (Johnson Willis) and his cat Schrodinger – another excellent example of a make believe puppet that moves and acts exactly as he should.

At first introductions you thought he was going to be a strict old man that didn’t really want evacuees, but actually he was a lovely kind gentleman that took care of the children and encouraged them to make decisions for themselves.

Lucy’s first journey to Narnia, where she meets Mr Tumnus is very touching and the innocence of the encounter quickly turns to something different, when he reveals what he is actually supposed to do if a human enters Narnia.

Edmund’s first voyage to Narnia, when he encounters the White Witch is much darker and the whole scene feels eerie and tense.

The white witch is pushed onto the stage in a carriage by her army looking every bit the wicked, evil villain, yet somehow she manages to make him believe she is his friend and can help him and bribes him with turkish delight and promises of power.

When the four children arrive in Narnia, they are met by the resistance with news that Mr Tumnus had been taken by the White Witch, the costumes and props for the animals are amazing, so much details has gone into making the animals as lifelike as possible and the movement of them all together is outstanding, Mr and Mrs Beaver are such strong characters, you instantly fall in love with them, and what voices!

All of the resistance are waiting for the return of Aslan the Lion to return and help them defeat the evil queen.

The Lion was a very large, beautiful piece of detailed puppetry, accompanied by Chris Jared who spoke as Aslan, which was totally captivating.

Both Eowyn and I agreed it was a brilliant production that had you gripped from the beginning all the way through, the main cast members were excellent throughout, and it was made even more beautiful by the musicians, and ensemble cast members that brought the whole story to life.

We were so impressed with the show, that Neva is going to see it tonight with 8 of her friends, she is 18 so that gives you an idea that it is suitable for the entire family!

The Lion The Witch and The Wardrobe Tour is in Norwich until Saturday, but be quick as there are limited tickets still available.